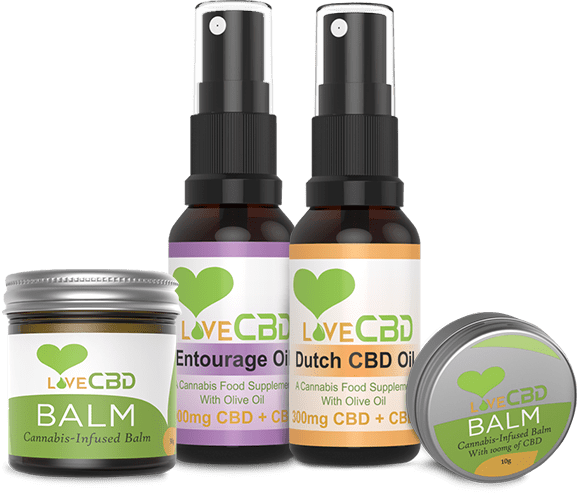 WHAT IS ENTOURAGE OIL?

The Entourage Oil is our unique cocktail of legal cannabis strains, which are chosen for their diverse cannabinoid content. By combining different types of cannabis grown in different climates we have sought to maximise the possibilities of the cannabis plant.

This effect is called "The Entourage Effect".

The concept of the Entourage Effect was conceived by Raphael Mechoulam, the man who first discovered THC and CBD. He suggested that cannabis compounds such as CBD work better when taken together. In other words, a proper cannabis extract should be more effective than CBD taken on its own.

We loved this idea so much that we developed a product based on it. Over the course of two years we’ve been mixing countless cannabis oils in an effort to perfect The Entourage Effect.

That’s the goal of the Entourage Oil: to perfect The Entourage Effect and to produce the Ultimate Cannabis Cocktail. A small study commissioned by the BBC programme Trust Me I’m A Doctor has shown that the health benefits of turmeric may be more pronounced when it is cooked, or eaten with food.

Turmeric, a spice common in South Asian cuisine, has become something of a ‘hero herb’ in recent years, as research builds to show it can improve everything from allergies to depression, inflammation to immune health. It’s become fashionable to sprinkle it on drinks and food, and it’s now a top-selling supplement.

Trust Me I’m A Doctor presenter Michael Mosely wanted to find out more about how turmeric yields its health benefits. So his BBC team commissioned a cancer specialist at University College London to conduct a novel experiment on 100 volunteers.

The team has developed ways to measure how cells undergo changes that could make them become cancerous, a process known as DNA methylation. If these changes are detected in time, potentially, they can be reversed before the cell turns cancerous.  Mosely describes DNA methylation as being like "the dimmer switch that can turn the activity of the gene up or down”. He says it may explain why the risk of developing lung cancer reduces sharply when they give up smoking:  "It could be that unhealthy methylation of genes, caused by tobacco smoke, stops or reverses once you quit”.

In the UCL study one group was asked to consume a teaspoon of turmeric every day for six weeks, ideally mixed in with their food. Another group were asked to swallow a supplement containing the same amount of turmeric, and a third group were given a placebo.

The volunteers who were asked to consume a teaspoon of turmeric a day mixed it into cooking, hot milk drinks and yoghurt, among other things.

Not surprisingly the researchers didn’t find any changes in the group taking the placebo. Nor did they find any differences in the supplement group. But the group that mixed turmeric powder into their food displayed quite substantial differences.

"It could be that adding fat or heating it up makes the active ingredients more soluble, which would make it easier for us to absorb the turmeric”

Prof Martin Widschwendter, who led the UCL team said told the BBC: "It was really exciting, to be honest. We found one particular gene which showed the biggest difference. And what’s interesting is that we know this particular gene is involved in three specific diseases: depression, asthma and eczema, and cancer. This is a really striking finding.”

Dr Kirsten Brandt, a senior lecturer at Newcastle University and who helped run the experiment, suggests that the way the turmeric was consumed may explain the different results. She told the BBC: "It could be that adding fat or heating it up makes the active ingredients more soluble, which would make it easier for us to absorb the turmeric. It certainly gives us something, to work on, to try to find out exactly what’s happening. In one of the first large studies of the Mediterranean diet as a ‘treatment’, Italian researchers have shown that a diet rich in vegetables, nuts, fish and oils worked better than statins in reducing the risk of early death.

Researchers followed 1,200 people with a history of heart attacks, strokes and blocked arteries over seven years. During that time, 208 patients died but the closer people followed an optimum Mediterranean diet the less likely they were to be among the fatalities.

High consumption of vegetables was shown to have the biggest impact on survival, followed by oily fish intake, amount of fruit eaten and consumption of mono-unsaturated fat, found in olive oil.

Speaking at a conference in Rome last week, professor Giovanni de Gaetano, head of the Department of Epidemiology and Prevention at the IRCCS Neuromed Institute in Italy, said: "We found that among those with a higher adherence to the Mediterranean diet, death from any cause was reduced by 37 per cent in comparison to those who poorly adhered to this dietary regime.” This, he says, represents a better success rate than statins.

” … those with a higher adherence to the Mediterranean diet, death from any cause was reduced by 37 per cent”

Professor de Gaetano added that diet had a "powerful effect” and doctors should consider tackling food intake before resorting to drugs. "So far research has focused on the general population, which is mainly composed of healthy people. What happens to people who have already suffered from cardiovascular disease? Is the Mediterranean diet optimal for them too?”.

The findings of the Italian study have been described by health experts as "extraordinary”, leading to some to call for organizations like the NHS to make fruit and vegetables available for free to the public. Other specialists continue to recommend a combination of statins plus dietary and lifestyle change.

Sir David Nicholson, former chief executive of the NHS, entered the debate over statins last month when he said he had stopped taking them as part of his medication for diabetes. "If a lifestyle change works then why would you take the statin? The trouble is that they give you a statin straightaway, so you don’t know what is working,” he said.

We are now fully stocked up with moogoo.

irritable skin balm is available at out of this world. phone 0115 9431311 for details
click here Available in 270g Pump or 75g Airless Travel Pump
This is a "creamier" version of the original Udder Cream moisturiser. It is designed to moisturise easily irritated skin using natural ingredients. The base oil of the cream is Sweet Almond Oil. This is high in the types of fatty acids needed for troubled skin.

Also raw Coconut Oil which naturopaths often use as a skin soothing oil. Other ingredients include pasteurised honey (so safe for babies). The pH is balanced to the skin through the use of Apple Cider Vinegar. Naturally, the apple and honey give the cream a wonderful fragrance and there is no need for us to add any other fragrance.

For all coconut oil products click: Here
We were told saturated fats were bad for us, that they clogged the arteries. Well, new studies have shown that was a myth; coconut oil is good for your health. Common sense should have told us this a long time ago. After all, societies that eat a lot of coconut are populated with some of the healthiest people on the planet. Now that we are no longer afraid to include coconut in our diet, we have found we can eat the meat, drink the water, turn it into milk, and squeeze out the oil. Every part is a great source of nutrition. But that's not the only benefit. Coconut oil is also antifungal, antibacterial, antiviral, and anti-inflammatory. It has a world of uses, from body care to health to household. Here are a just a few:

Your Cart Is Empty